I read several woodworking magazines. Shop Notes gets browsed and filed, Woodsmith gets read in more detail, Popular Woodworking I read almost cover-to-cover, Wood magazine gets read (mostly), Fine Woodworking I pick up off the newsstand occasionally. The late, (and by me) lamented Woodworking – the finest of them all- gets read again and again and again, and resides in its entirety on my iPad. I look at projects that might be interesting, read the technique articles and tool reviews, and usually extract some things worth keeping. The downside of this armchair-woodworking is that I occasionally find something that is way too cool to not build as soon as I have a chance, no matter what other projects I’m behind on.

A good example of this was something I stumbled on in a back issue of Popular Woodworking (October 2005).  An article by Samuel Peterson called Build an Oil Wicke.  Drop-everything-and-go-build. 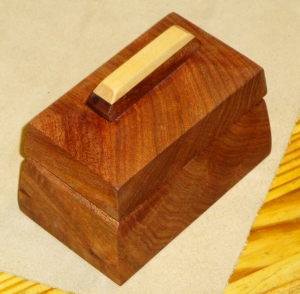 If you’ve used hand planes for any length of time, you’ve probably discovered that it helps a great deal if you keep the sole of the plane slightly lubricated.  Some people keep an oily rag handy. I’ve seen some woodworkers with a block of paraffin wax that they swipe over the sole of the plane occasionally.  An oil wicke (or plane wicke) is a beautifully archaic tool – a can or box with a rag soaked in oil.  Before planing and every few strokes, you pull the plane backwards across the rag, and it lightly oils the surface.  It helps prevent chatter, lessens the friction in planing, and helps get you through abrupt ‘catching’ in hard woods.

The article recommended using a tin can inset in a block of wood – and the author had a very cool old Kayes oil can he used, with a removable lid.  I couldn’t find anything but a tuna fish can.  That was out.  Then I remembered a post on The Art of Manliness (one of my favorite blogs), called 22 Manly Ways to Reuse an Altoids Tin. I had one handy (Ginger, of course), and decided it would be perfect for #23. 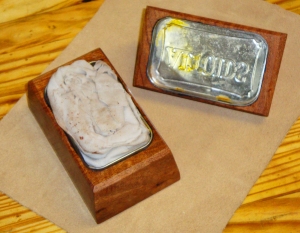 I had a pretty hefty rectangular scrap of mesquite in the bin left over from the Roubo du Garage. That was ideal, because I wanted the wicke to be heavy enough that it wouldn’t try to slide around the bench in use.  I sawed the top third off the block, and routed out the openings to hold the two pieces, leaving the bottom of the tin protruding about 1/8″ above the block.  (No, I didn’t route out the recesses by hand, and if you’ve ever worked in mesquite, you know why.)  I glued the two pieces in with epoxy, and when finished setting, the lid snaps into place pretty tightly.  I cut the beveled sides of the box, and shaped it with a smoothing plane and the belt sander.  The handle is a piece of scrap left over from the recent picture frame (wine stoppers, box handles, and I’ve still got a couple of feet left over. Who knows?). One coat of danish oil, and a pass through the Beall Wood Buffer. 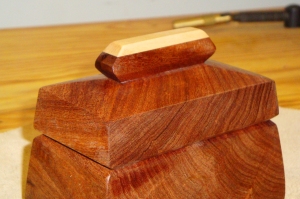 The article recommended using raw linseed oil (not boiled; it’s a combustion risk) or mineral oil. I have a bottle of camellia oil I use to help prevent rust, and decided to try that.  Not only does it work, it works so beautifully that I had to be careful to hang on to the plane.  One swipe backwards, ten strokes, swipe again.  I’m completely converted, and the wicke looks good enough that I can put it in my tool cabinet without wincing whenever I see it.

Since that went so smoothly (sorry), I decided to piddle around on another shop project I’ve been putting off. One of the problems with woodworking is that it’s self-perpetuating – I tend to spend as much time on small projects for the shop as I do actually making other stuff.

The handle for my Veritas sliding tail vise is either soft maple or poplar or some other innocuous white wood, and I decided that I wanted to replace it with a mesquite handle to match the other mesquite vise hardware on the Roubo.  Mesquite doweling isn’t exactly available at Lowe’s (surprise, surprise). 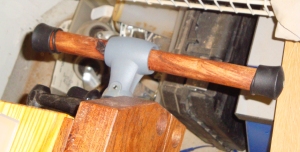 I grabbed another scrap of mesquite, milled it square, and clamped it in the vise.  A few minutes with a plane (sliding gracefully thanks to the oil wicke) and a spokeshave, and I had a dowel – even round enough to pass the “roll across the workbench” test.  Beautiful grain; it had a large knot in the middle, as mesquite so often does.  I polished it, screwed the ends back on, and the vise handle no longer glared at me in shining white.

I clamped up a scrap of wood, racked the vise shut, tightened it… and BAM.  The handle shattered across the knot.  D’oh.  What was I thinking? Vise handles take a lot of stress.  Stick to straight grain. <sigh>

From tree to cutoff to vise handle to firewood.  What a journey for that little piece of mesquite. Meanwhile, it was good practice in planing dowels.

“If I did not form and shape and build, what would I have done to leave my mark on the world? My eyes have been filled with the endlessly changing patterns of the grains. I have felt the warmth of a thousand suns in my hands every day.” - Jonas Wainwright